Dish of the day this Thursday (10) is a great recipe for stuffed chicken thighs. Considered delicious and easy to prepare, taught by entrepreneur and gastronomy student Michel Paranaiba di Castro.

Michelle says she started working with ground meats after she moved to Goiania during the pandemic. The student came from Inhumas, where she ran a shopping center with her husband. Despite the sudden change, Michele did not lose his head and continued to work with the delivery of minced meat, and the thigh and drumstick became a success of the menu.

According to the entrepreneur, the recipe can be served both as an appetizer and as a dish for lunch or meetings. The thigh is stuffed with ham, cheese, pepperoni, bacon, sun-dried tomatoes and olives.

According to the chef, all toppings are to taste, as it depends on the size of the thighs, which can be small or large.

The first step is deboning the thigh and drumstick. After preparing the meat, leave it to marinate in seasoning for 1 hour. After this time, it’s time to stuff it with ham, bacon, pepperoni, olives and tomato to taste.

With the help of a needle and thread, sew the thigh and drumstick and, having closed it well, send it to the oven and let it bake for 40 minutes. Then just serve. 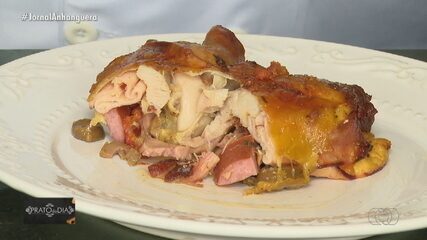 Dish of the Day: Learn How to Make Stuffed Chicken Thigh

VIDEO: see all recipes Meals of the day