Monthly SECEX/ME data shows that for the 12-month period ending April 2022, foreign exchange revenue generated from chicken meat was almost a third higher than in the same prior period, surpassing US revenue for the first time. $8 billion mark.

Prior to September last year, the 12-month revenue record was set in the first quarter of 2020, when an unprecedented $7 billion mark was reached. But that was it, as the subsequent decline in volumes and average price resulted in losses that exceeded US$1 billion. The bottom of the well occurred in the first quarter of 2021, when the foreign exchange earnings accumulated by chicken meat in 12 months did not reach 6 billion US dollars.

The recovery, which has continued since then, began early in the second quarter starting in April. But the record set in February 2020 ($7.077 billion) was surpassed only more than a year and a half later, in October 2021, when the amount accumulated over 12 months reached $7.2 billion.

Six consecutive months have passed since then, until the record hit $8.168 billion in April last year. Compared to 2021 revenue of $7.489 billion, total revenue for the 12 months ended last April increased by more than 9%.

It is interesting to note that between the most recent bottom (February 2021) and the most recent all-time high (April 2022), annual foreign exchange earnings from chicken meat have averaged just above 2.4% per month. If this indicator is maintained over the next few months, the sector’s revenue in the second half of the year will reach 9 billion US dollars. 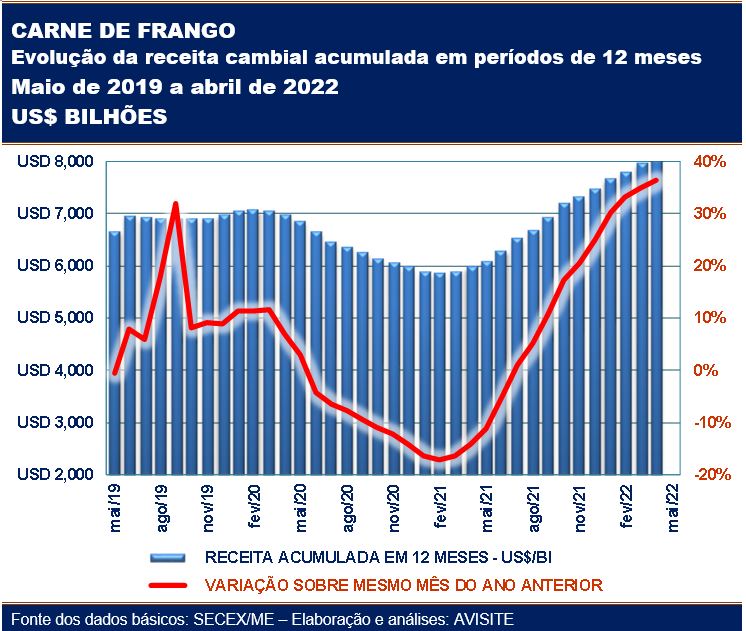